The day Cohort 3 went to Bristol 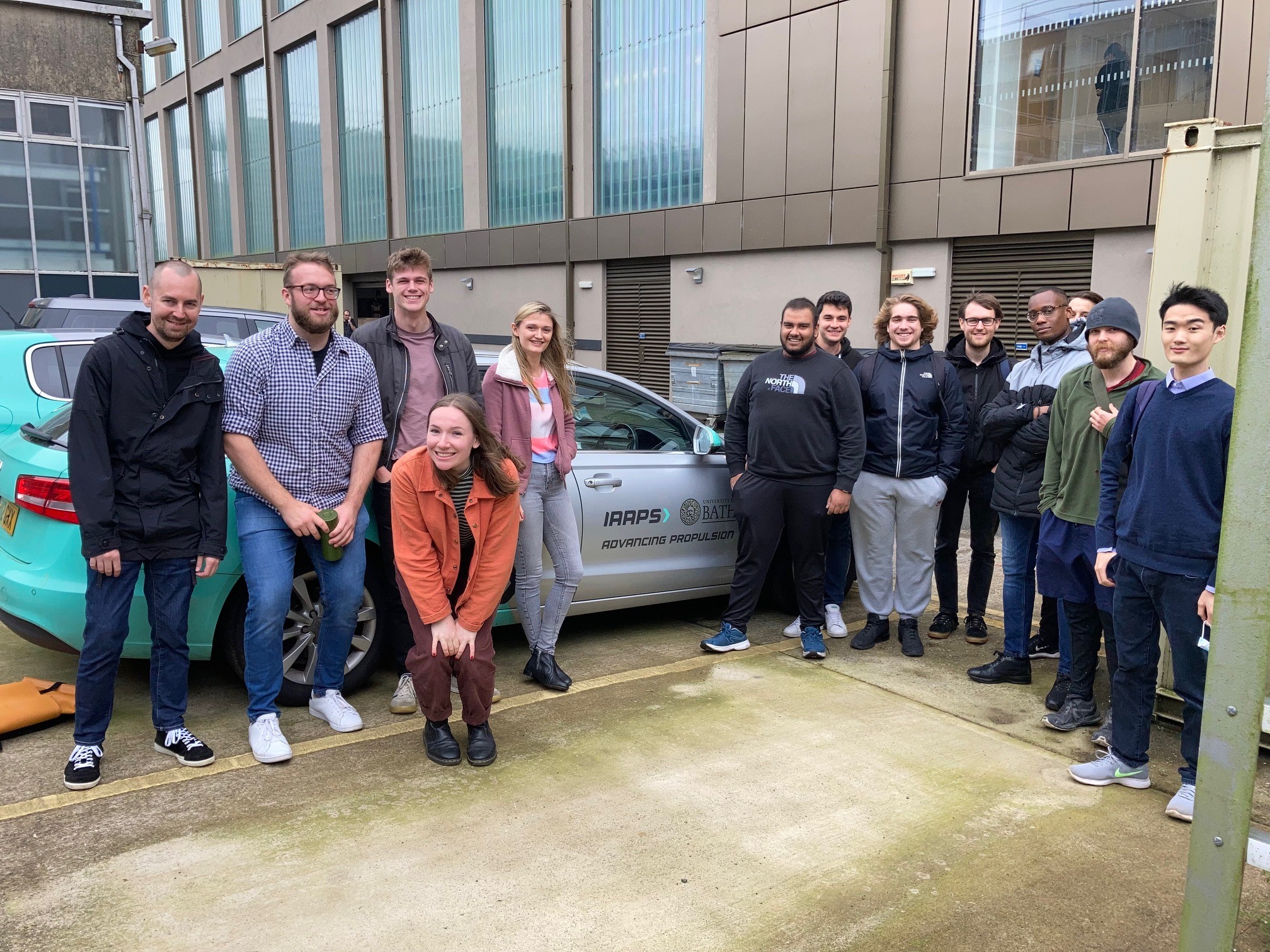 One week into the AAPS MRes and our first group assignment was set. The challenge was to come up with a sustainable, low carbon mobility system to travel into Bristol in 30 mins in 2030.  As the only student in our group who commutes daily from Bristol to Bath, I was uniquely placed to show my colleagues some of the highs and lows of Bristol’s current transport system.

We decided to do a site visit and introduce an element of competition by splitting into ourselves into a “bus and train” group – the B team and a “car” group – the C team. We all left Bath campus at the same time (1400 on Tuesday 19th October to be precise) with the B Team heading off to the bus station and boarding the U1 within minutes whilst the C Team drove off towards Bristol in the AAPS Toyota Prius.

The B Team enjoyed the scenic view from the top of the double decker U1 and made a seamless transition onto the train, arriving at Bristol Temple Meads 50 minutes after leaving campus. To our surprise, the C Team were nowhere to be seen at the station car park where we had agreed to meet.  In fact, we had to wait nearly 30 minutes for them to arrive.  It seems they had made a few detours enroute as well as encountering some congestion so the car journey was considerably slower than public transport even out of peak hours.

We started our visit by walking along the riverside on a traffic-free walking and cycling path which was a calm and pleasant experience. In non-COVID times there is also a ferry service that connects the station to the city centre but sadly we weren’t able to try that out. The riverside path is interrupted by some major roads. We climbed a flight of steps to Temple Way (a dual carriageway) where we viewed a section of my daily commute – a narrow, on-road cycle lane (photo) which, we agreed, is not for the faint-hearted or novice cyclists. 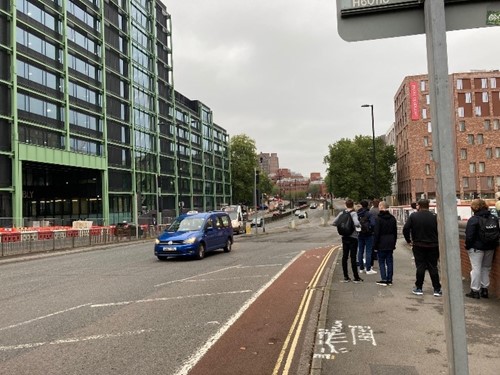 We then walked up to the Old Market junction. This was remodelled in 2019 to improve walking and cycling links from the east into the city centre. Most of the group were unimpressed saying they found it unclear and slow to cross with waiting times at each arm. I have to agree (although it is an improvement on what was there before). 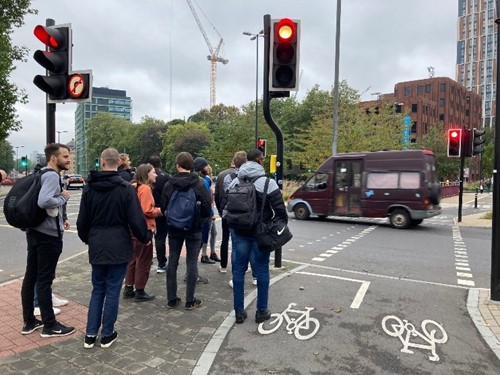 From Old Market the route connects to Castle Park which has one of the best quality traffic-free walking and cycling routes in the city. Everyone agreed it was a relief to get away from the noise and fumes of the major roads and enjoy the trees in the park and tranquillity of the river. The path is segregated for pedestrians and cyclists although we noticed that the markings were unclear which leads to a lot of unnecessary conflict. 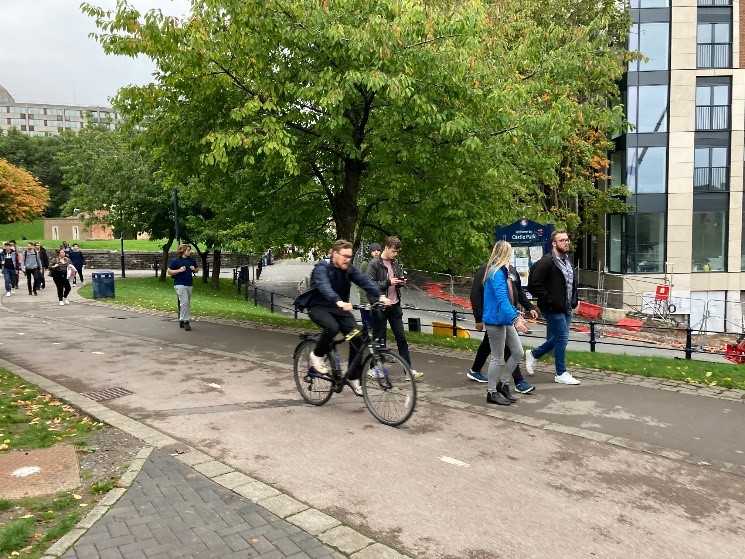 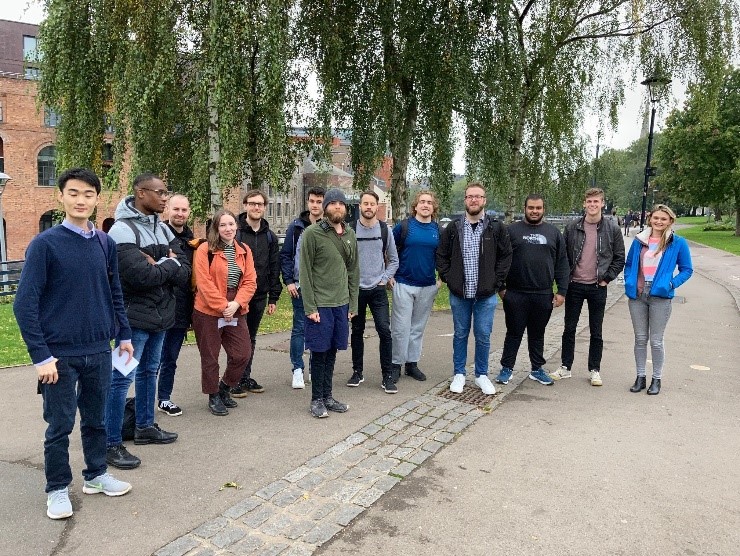 From Castle Park we walked through the Old City and St Nicholas Market to the central area of St Augustin’s parade where most of the bus routes converge. The medieval streets of the old city are almost pedestrianised now. The street closures have advanced incrementally over a number of years and then accelerated due to COVID-19 when the council allowed bars and cafes to expand onto the streets to help with social distancing. This has led to a more convivial and less traffic-dominated feel in the narrow streets. 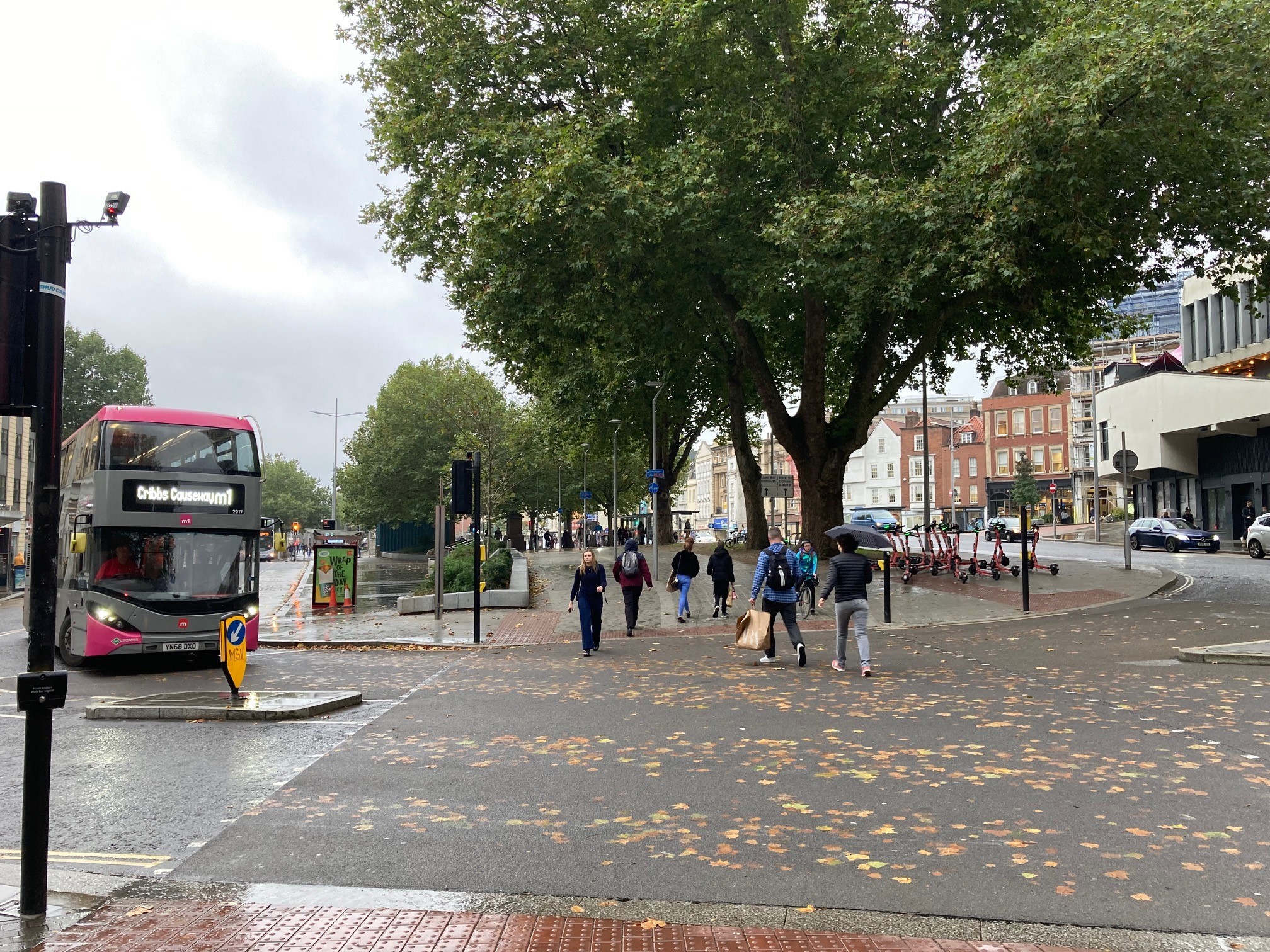 The final part of our site visit took us to St Augustin’s parade close to the harbourside and the site of the now infamously toppled statue of Edward Colston.  We saw that cyclists and pedestrians are again allocated wide separate paths that there is confusion and conflict due to poor signage.  Most of the buses, including the new rapid transit metro-bus routes that connect the northern and southern suburbs, stop along the parade so has a feel of a central transport hub.  Although the centre has large trees and a wide central section for pedestrians and cyclists, we agreed it is still rather traffic-dominated with cars and buses passing on both sides and slow signalised crossings making progress on foot or bike slow and fragmented. 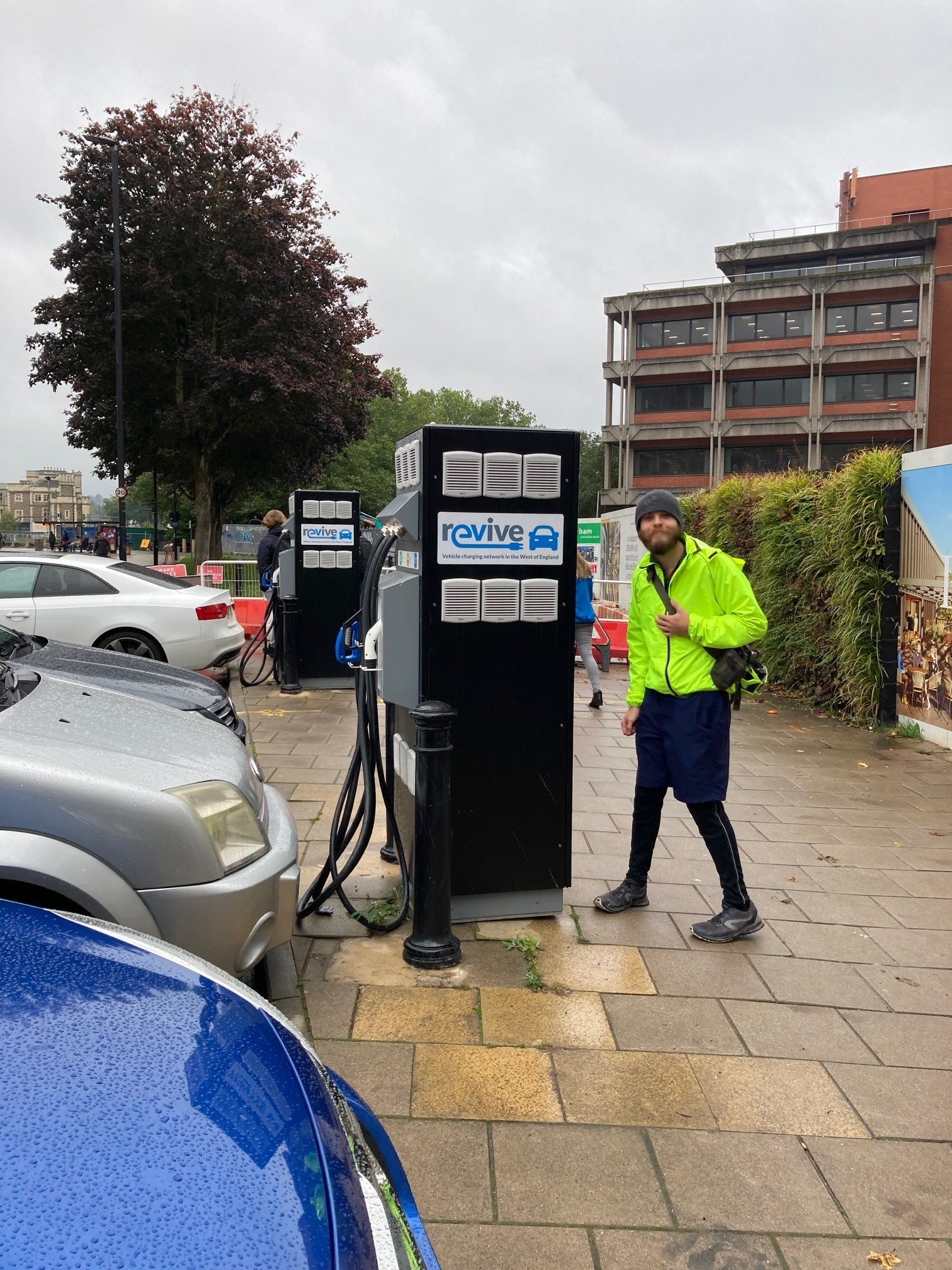 We returned to Temple Meads via another main road – Victoria Street – which now has low volumes of traffic due to the permanent closure of Bristol Bridge (following Extinction Rebellion protests which closed the bridge in 2019). We were very pleased to see our first electric vehicle charging point in this area which serves large businesses including Ovo and Bristol City Council.

We retreated to the Knights Templar for a well-earned drink and a debrief on what we had seen.  The common view was that, whilst Bristol has taken some bold steps to improve public transport and walking and cycling routes, cars are still prioritised at major junctions and routes are discontinuous and badly signed.  This led to a walking experience that was at times confusing, frustrating or even dangerous (the “lows” such as Temple Way) and at times delightful (the “highs” such as Castle Park). If this were a school report for Bristol’s transport system, it would read “noticeable progress in all areas but could do better”!

The day Cohort 3 went to Bristol 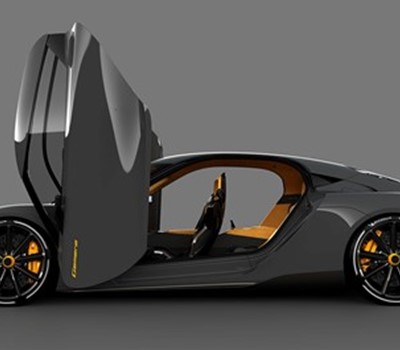 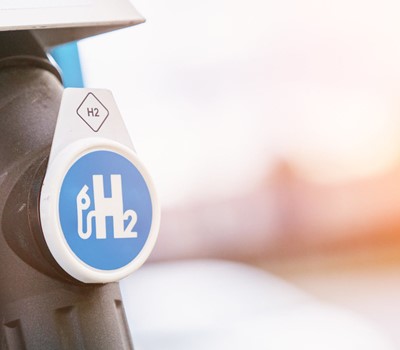 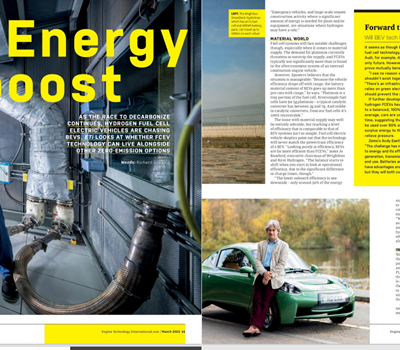 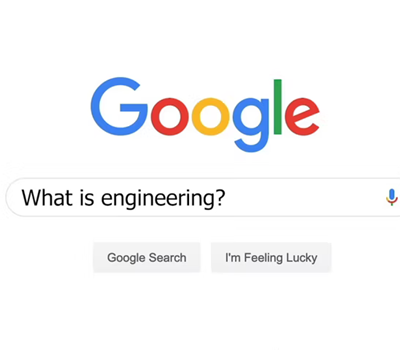